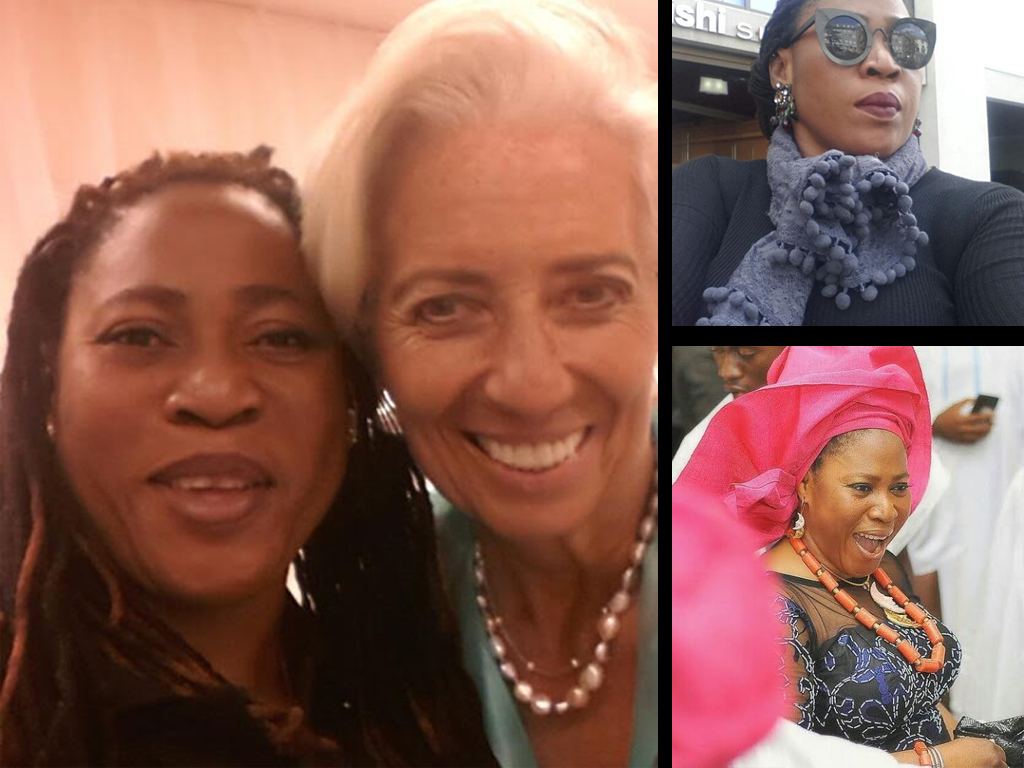 This week, we have the singular honour at LR, of bringing to our “borderless motivational platform”, a woman undeterred.  She has made a mark outside of her expected comfort zone. She is positively impacting humanity and there is no stopping her. The world has recognized her positive impact, which is evidenced by the numerous feature events she gets on both print and visual media as well as social media across the world: Radio Nigeria, Lagos State Television, Voice of Nigeria, Voice of Africa, SABC South Africa, BBC World News, The Economist, Africa Journal, CNN, NPR, New York Times, Aljazeera, Der Spiegel just to mention a few.

Once upon a time, in the ancient city of Benin, I had a dream. It was also a very strange dream at the time.  I will not mind if you just laughed reading that, because over time, it has been the usual response I get when I begin my story. However, your laughter does not erode the truth of my story. I had a dream at the age of 13 that I was a very successful mechanic. Following the first episode, I laughed like you just did but when the dream kept reoccurring, I stopped laughing and started believing.  Then I went to my parents and told them about my dreams. They too laughed. My dad and mum could not believe their ears. They told me to forget the ‘nightmare’ and begin to have better ‘dreams’.

Shortly after he told me to wake up from my ‘nightmares’ my father visited the United States of America.  He came home from his sojourn to the United States with a different mind-set, something had happened to our loving father – back then, we all could not quite understand what it was but I know better now. Our daddy became better convinced that his children could become great at anything they work hard to be.  He told us stories of all he had seen. He told us how amazing it was to watch female mechanics at work. This dad, who was from a society where the auto mechanic trade was a male dominated career path, the same man who had told me to wake up from my ‘nightmares’ now described to us, the skill and pride with which the American ladies fixed cars and how much dignity they bore in their labour. We all listened with rapt attention and through his eyes, with our minds eyes, we were able to traverse horizons yet to be seen and conceive visions that would make a difference to humanity.  I in particular was elated; I became liberated without any doubts and undeterred even the more to actualise my dream now my own dad by the special design of fate had caught the vision also. As I listened to my daddy’s stories, I figured that if the American ladies could fix cars, then there should be nothing stopping the Nigerian ladies from doing the same thing in their numbers, very soon.

Thanks to my daddy, so began the strong reinforcement of my initial dream of becoming a female mechanic and my vision that, in order to make my own life meaningful, I needed to add joy and meaning to other people’s lives. I decided I would start by fixing their cars and making them smile after which I would then figure out some more ways to better humanity.  My name is Engineer Sandra Aguebor (NPOM), the first female mechanic in Nigeria, founder of the Lady Mechanic Initiative (LMI), CEO Sandex Car Care Ltd and the Initiator of the Lady Mechanic Academy. I have been practicing as a mechanic for about 30 years now.

I was born into the family of Late Mr & Mrs Robert Aguebor in the 70’s. I attended Ivbiotor Primary School and St Maria Goretti Grammar School, both in Benin City. I got my dad (who was now a supportive convert) to enrol me part time in a mechanic workshop not too far from home. After school every afternoon, I would go to the garage and stay there until it closed. I was the only girl in the male dominated workshop. My mother could not quite understand why I chose the mechanic workshop instead of towing the usual culinary path. I was often the subject of ridicule by my male colleagues in the shop because they too could not comprehend what a girl my age was doing in their midst (as far as they were concerned I had no business being there). The other children and young girls also found the sight of me in my overalls quite strange. Against all odds, I went on, undeterred by the stares and whispers, in pursuit of my dreams. With determination undiluted, I proceeded to the Benin Technical College (BTC), Benin City following which I enrolled at the Auchi Polytechnic in 1989 to study mechanical engineering. Once again, I was the only female in my class. I graduated from the program in 1991 as the first Nigerian woman to be certified as an auto-mechanical engineer and then went on to work with the then state-owned Bendel Transport Service and later the Nigerian Railway Corporation in Lagos.

Not one to settle for anything short of the zenith, I decided to start my own garage. It was nothing fancy, just a makeshift structure, constructed with cardboard paper to protect me from the elements of nature on a patch of land that was located behind the old Federal Secretariat, but along came the men from the Inland Revenue Authority who demolished it right down. Without a garage where my clients could come to me, I decided it was time to go out and meet the clients instead. I converted my private car into a mobile workshop moving from place to place and leaving satisfied customers in my wake.  Those days were tough and it was my passion for what I do and the tenaciousness to succeed or die trying that kept me going and focused on my dreams.

Today, I have a dedicated team and together with them, run the SANDEX CAR CARE world-class auto garage. However, since my driving force and inspiration is to derive joy in adding meaning to people’s life, as well as the empowerment of my fellow women.

In 2004, I founded the Lady Mechanic Initiative (LMI) http://ladymechanicinitiative.org: a non-profit organization that helps girls and women develop mechanical skills to enable them become professionals in the field of automobile repairs. The Lady Mechanic Initiative is an accredited non-governmental organisation which trains young women as auto-mechanics, lady mechanic drivers, generator technicians, water pump and speed boat mechanics. The LMI programme offers a transformative approach that challenges gender stereotype and changes the lives of Nigerian women by leading to economic and personal empowerment. 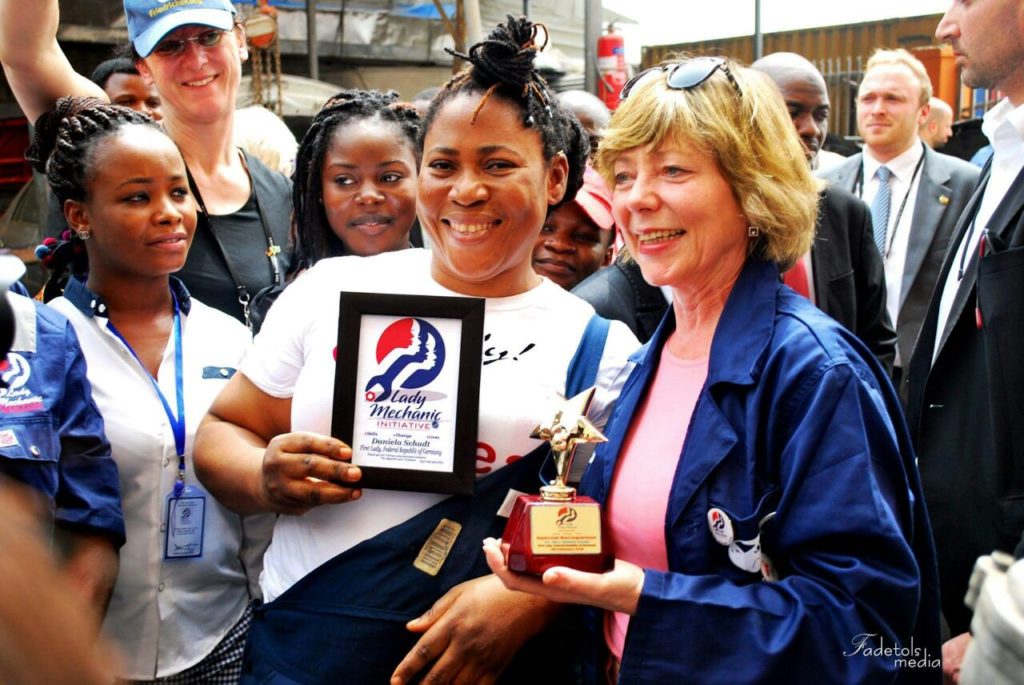 At LMI, the girls and women acquire skills, to defeat poverty, live a better life and create wealth. In the last ten years, we have achieved so much through the Lady Mechanic Initiative. Among this fold are several former indigent girls and women, ex-commercial workers, deportees, orphans, school certificate holders who were unable to proceed to the higher institution. These empowered individuals now live a dignified life. This gives me a lot of satisfaction and an exhilarating feeling that comes from serving humanity.

The success story of the Lady Mechanic Initiative has attracted both local and international attention and recognition.

Lady Mechanic Initiative is currently located in four states in Nigeria (Lagos, Edo, Kaduna and Kano) as well as the Federal Capital Territory Abuja. On Thursday 28th July 2016 in Lagos state, we graduated our latest batch of 170 female mechanics.

Lady Mechanic now has over 600 Alumni members in Nigeria.

Our long term goal is to train and graduate 10,000 female mechanics by 2025, and so far, LMI has trained and equipped over 700 young women, out of which 85% have become gainfully employed in reputable automobile organizations such as TOTAL NIGERIA PLC, TOYOTA MOTORS, PAN AUTOMOBILE, COSCHARIS MOTORS, HONDA PLACE, RENAULT MOTORS INTERNATIONAL, CFAO MOTORS to mention a few. Others have gone on to successfully establish their own garages and are currently training other women in the same field. 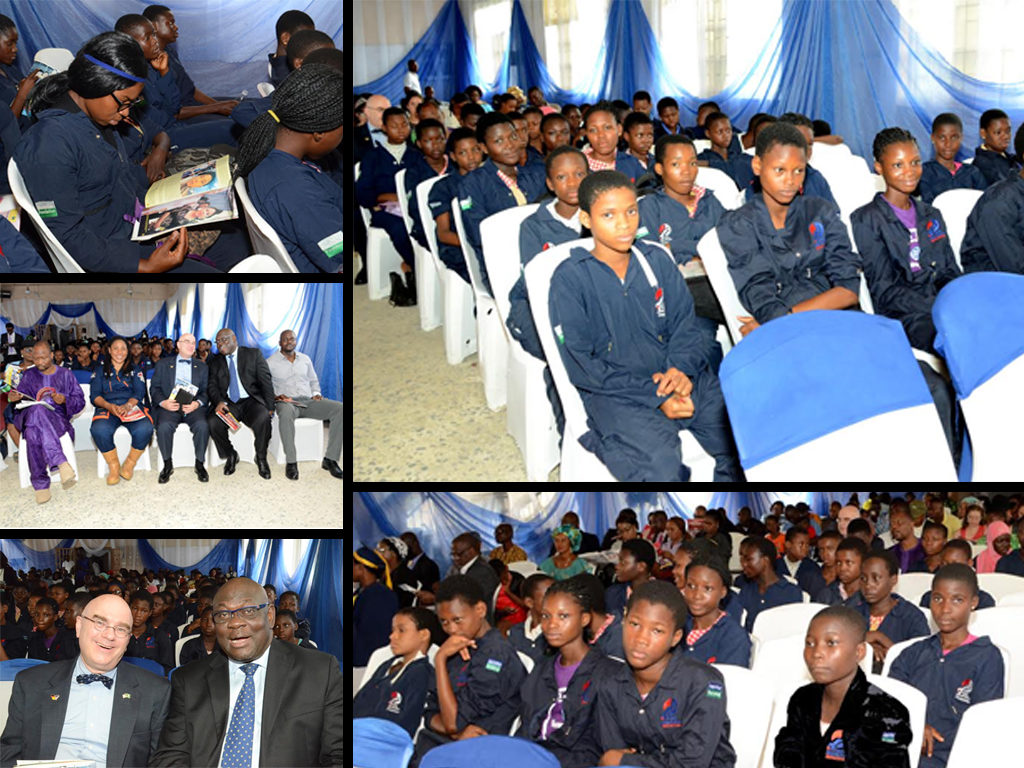 My message to the many young girls in Nigeria is that their success is in them and not in any European country I endear them to remain women undeterred if I could do it, they surely can.

Team LR wishes to point out what makes Sandra and her team unique. The uniqueness is in the palpably measurable indices of the change she and her team are making in her country, on the continent and in the world. She is churning out better-equipped and empowered women in their numbers. You empower a woman and you empower families, communities, nations, the continent and the world at large. This woman is simply amazing. Juggling family life while not only surviving the challenges of a male dominated industry but also breaking boundaries and putting her country on the map.

Despite the word limit, we cannot help mentioning how Sandra received the CLO Coordinator of the United States Embassy, Sherry Rhinehart, and her Assistant, Leila Lampkins, at the Lady Mechanic Initiative’s Lagos Office on the 20th of February 2014. They came with plans to facilitate a relationship between the Initiative and the US Embassy, which has flourished over time. Furthermore, Sandra and her trainees also received a female student Leylah from Scotland on the 14th of March 2014 at the Lady Mechanic Garage in Lagos for an exchange programme. The Student was at the workshop to learn alongside the trainees on auto mechanical repairs and the training programme was filmed by the BBC network and broadcasted in over 200 stations worldwide.

Sandra emphasizes that she cannot do all she does alone without the help of her collaborators, donors and funding bodies. This woman undeterred is appealing to us all not to be deterred in seeking our own niche and making the difference we wish to see.

Let nothing deter you as you hit the keyboard and join us to celebrate and encourage this unique and selfless lady by leaving your comments.