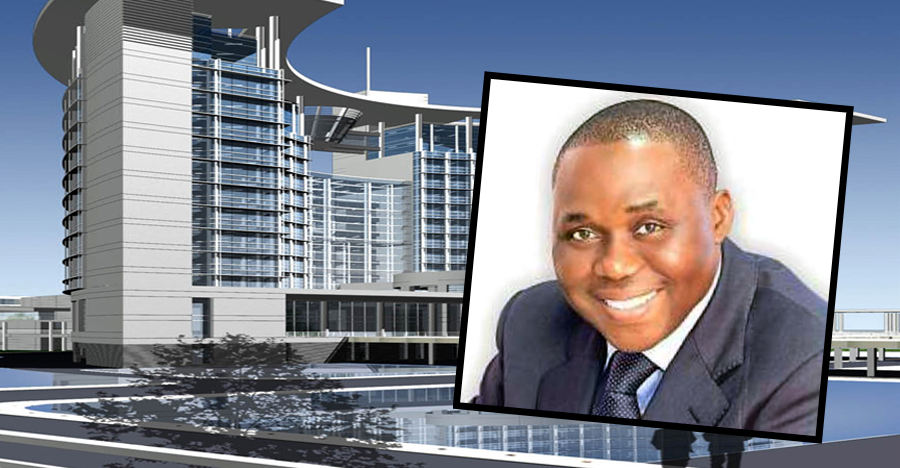 Is sky really the limit for man’s achievements?

As promised in the February’s Newsletter, the LR Team hinted you to expect a narrative on this space that would make you reconsider what the limit is for one’s achievements. “Is the sky the limit to man’s achievement?” This was the first question posed to us by the leading name in Assisted Reproductive Technologies (ART) and Public Private Partnership in Healthcare in Nigeria and indeed, sub Saharan Africa.

Is the sky the limit or is it the stepping-stone? Is every ones sky the same or different? In our experience, every one’s sky differs and is relative. The sky for the son of a president would certainly differ to what the sky signifies for the child of a farmer. Whatever one perceives one’s sky to be, is that the limit? Is it fixed? Can each of us, envision our sky and yet surpass it?

[His mother was a trader and also engaged in subsistence farming to feed her small family. She was a dynamic lady and an active member of their local community development association, presiding over the women wing with strong emphasis on socio-cultural activities. She also was an effective ‘mobilizer‘ for the village’s charities, but she was poor. Young Ibrahim inherited his father’s talent and his mother’s energy. His mother placed him under the tutelage of one Hausa Islamic Sheikh before the age of nine and because of his rare ability to recite the Koran at that tender age fluently he was nicknamed “The Preacher”. It was at this Koranic school that his faith in God, fundamental to his life, took root. He was groomed as a child for greatness and taught that hard work will take one to high places.]

Is sky really the limit for man’s achievements?

I wish to share my life story, hoping to inspire the younger generation towards a give and take relationship with their existence. There are a number of challenges that have confronted me in my life. The difficult decisions I made at each crossroad and the many sacrifice-laden choices eventually led to exponential progress in life. My present position makes me feel fulfilled and happy.

I am Dr Ibrahim Wada, Founder and Chief Executive Officer (CEO) of Nisa Premier Hospital (www.nisa.com.ng) and also Chief Executive of Garki Hospital, Abuja (www.garki-hospital.com). Garki hospital is a public private partnership (PPP) with the Federal Capital Territory (FCTA), the first of its kind in Nigeria.

I was born on at Ayangba, Kogi State of Nigeria. I am the second of the only two surviving children of my mother, Rekiya (now late). My father Pa Wada Ejiga passed on in 2014 at the age of 102 years. In the prologue above, one can see how these two very important persons laid the foundation for my life.

As a child, I knew I was going to be a doctor right from my primary school days. I attended St Charles’ College, Ankpa and later the Government Secondary School, Dekina. For post-secondary school, I chose the School of Basic Studies, Ahmadu Bello University (ABU) Zaria instead of the King’s College Lagos. I graduated with MBBS in 1980 and moved to Jos for Housemanship following which I did the National Youth Service Scheme (NYSC). I started Residency training in Obstetrics & Gynaecology in 1982 at Jos University Teaching Hospital. I passed the primary and post-graduate examinations at first attempt and became a Senior Registrar in 1985 at the age of 28.

I left Jos University Teaching Hospital for Addenbrookes Hospital Cambridge in 1986 and passed the part II final exams for membership of the Royal College of Obstetrics & Gynaecologists (MRCOG) in 1988. In 1989, I became a Clinical Fellow in Reproductive Medicine in Manchester, Manchester Fertility Services (MFS) BUPA Hospital and later at the Regional in-vitro fertilisation (IVF) unit, St. Mary’s Hospital. I was appointed Consultant Gynaecologist at Bourn Hall Clinic Cambridge in 1992.

Return to a second career in Nigeria

In 1994, I returned to Nigeria as Consultant Obstetrician & Gynaecologist (Specialist Grade 1) and Head of Department, Gwagwalada Specialist Hospital (now Abuja University Teaching Hospital). In 1999, I was appointed Chief Consultant Gynaecologist and Head of Department National Hospital, Abuja. I eventually became the Clinical Director and Chairman Medical Advisory Committee (CMAC) of the National Hospital from 2002-2006. From 2007 to 2009 I was the pioneer Medical Director, Garki Hospital Abuja.

In 2008 I bagged a Master Degree in Business Administration (MBA) with core speciality in International Hospital and Healthcare Management, from the Frankfurt School of Finance and Management, Germany.I returned to the National Hospital in 2009 and freely resigned from public service in 2014.

The fore-goings show that my career as a gynaecologist was built on experiences gained in both public and private sectors in Nigeria and the United Kingdom.

Hospitals and organisations initiated in Nigeria

Nisa Premier Hospital (Nisa) was established in 1996 in the small town of Gwagwalada, a suburb in the Federal Capital Territory (FCT). The Hospital moved from Gwagwalada to Jabi (main Abuja city), its current location in year 2000. Nisa has grown tremendously over the years and now houses 60 in-patients beds and 40 baby cots. Nisa provides a wide range of healthcare services including general outpatient services, family medicine, obstetrics and gynaecology (O&G), surgery, paediatrics, pharmacy, diagnostics laboratory and radiological services as well as fertility and in-vitro fertilization (IVF) services.

Since 1998 when Nisa’s first IVF baby (Baby Hannatu) was authenticated by the Federal Government in Nigeria was born, more than 2000 IVF and intra cytoplasmic sperm injection (ICSI) live births have been recorded in the hospital. Nisa is recognised as a reputable international fertility and IVF centre. 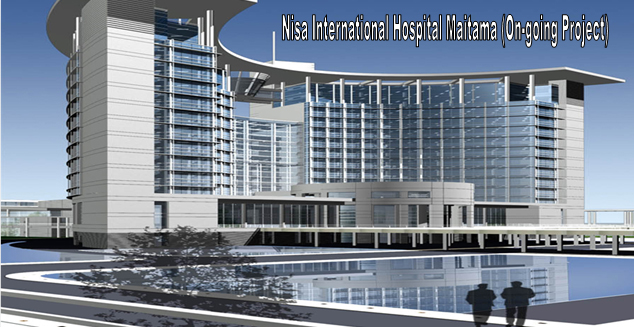 This partnership supports the less privileged patients in the FCT as they receive treatment in the hospital through the Social Welfare Unit jointly set up by Nisa and the FCT Administration.

The “Baby Hannatu Foundation” is a non-governmental organisation (NGO), set up by Nisa. This charity is dedicated to offering charity fertility treatments for the childless and poor persons in our society. BHF provides subsidized IVF services as well as general education and support of fertility challenged patients. The low cost IVF services are obtainable in both Nisa and Garki Hospital to support needy couples.

The challenges and the choices behind my story

At various times in my life it becomes necessary for me to take decisions that are crucial to moving forward. However, each of the decision is often a booby-trap and to fail after making a wrong choice could potentially derail progress.

One such point in time was when I opted to accept a supernumerary (unpaid Senior – SHO) post in Cambridge whilst I was a Senior Registrar in Jos. The need to improve my knowledge base was the main consideration rather than creature comfort as a paid Senior Registrar!

Another point of note was when I opted for a Clinical Fellow in Assisted Conception in Manchester. A post that led to about 50% drop in my salary. Here again, pursuit for excellence and knowledge prevailed over financial considerations and creature comfort!

A third major decision milestone was when I decided to return to Nigeria in 1994. I chose to come back an put my acquired skill to use in serving my Father Land, despite the political instability at the time (“June 12” crisis), amid other fears of depreciating Naira Currency, insecurity, just to mention a few. I was able to make the decision based on the fact that I wanted to give back to the society that had given me the opportunity to become a doctor in the first place! I also looked far ahead and saw that opportunities in the growing economy of Nigeria had greater potential than an already ‘grown’ one. This was where I could effect a true and positive difference.

I have been guided by what I call the GCS doctrine: God, Country, before Self. This doctrine guides me all through life.

Finally, what should be the limits of man’s quest to improve himself? I found guidance in the words of Marcus Garvey, the great African American Philosopher: “God and Nature first made us what we are, and then out of our own created genius we make ourselves what we want to be. Follow always that great law. Let the sky and God be our limit and Eternity our measurement”.

The story of my life, career and achievements tell me that there can be no end to the quest for self-improvement and that sense and courage are key to human advancements. If God’s universe is expanding at 46 kilometres per second, lets tell ourselves that nature has space for everyone and much more. However, will each and every one of us know when the time has come to take a plunge? That is the time to make the hard decision! Please watch out, when making those crucial life choices – the ones that most times would take you beyond even your own perceived limits are often the least convenient or comfortable options. Sky is not the limit for the goal post (universe/eternity) is ever moving. Good luck and best wishes.

The LR team after hearing this story, have concluded that the ‘sky is man’s stepping stone’. What ever our ‘sky’ may be, each of us surely has the ability to create it and surpass it. There is a wise saying “if you aim for the stars; you will land on the moon” (remember the fact that the moon is closer to earth than the stars). Dr Ibrahim Iyoma Wada has certainly maintained his speed of light travel from his very humble early background till now to when as it reads on his web site, he is poised to continue “setting up leading brands in healthcare service delivery in Nigeria and Africa, providing top class best practices to patients at par with international standards”. The same boy who never owned a pair of shoes until he was preparing for his final examinations at college is making positive impact on the lives of others in mind blowing numbers. He has been honoured with several awards including Kogi State Order of Merit in 1999 and the National Award of Officer of the Order of the Niger (OON) in 2007. He has written 15 peer reviewed papers published and a book (Second Chance) – describing his experiences of successfully relocating from the UK to practice in Nigeria. Do you still think the sky is man’s limit? Drop us your comments.